It has been one of the world's worst floods since the floods in South Asia in 2020 and characterized as the worst in the country's history declared as a flood emergency. Pakistan was hit by heavy monsoon rains and melting glaciers following a severe heat wave, all of which contributed to this extreme event strongly related to climate change. Flooding has washed away buildings, infrastructure, crops, and livestock from hilly places to plains, causing the Pakistani government to predict damages of US$40 billion.

Cloudeo team performed geospatial analysis over one of the major flooded regions, in order to extract insights generated from geospatial data to support public authorities and institutions, as well as all actors that follow closely this extreme event.

The study area covers parts of Balochistan and Sindh provinces, with the largest coverage on the latter. The analysis uses high-resolution satellite imagery for the mapping of the flood, and ancillary geospatial datasets (Land Use / Land Cover and Buildings located within the area) to support the findings.* As for the satellite imagery, Copernicus Sentinel 2 images were used in order to extract the areas covered with water.

Satellite imagery can be used to monitor changes in land cover and extract meaningful insights over specific areas of interest (AOIs). Cloudeo exploited the high-resolution imagery of Copernicus Sentinel-2 (10m pixel size), available through Sentinel Hub,  to estimate the level of impact of this devastating flood event.

As of September 3rd, a total of 12,768 square kilometers were covered by water within the area of interest. Of this area, 70% were croplands, and a total of 5115 and 60135 buildings were affected within the province of Balochistan and Sindh respectively.

Specifically, due to this extreme flood event, over the AOI as of 3/9/2022 there were:

The density of the affected buildings by the flood event as of September 3rd is presented in the following figure:

Satellite imagery combined with relevant geospatial data can indicate the level of impact caused by a severe environmental phenomenon, such as floods. With the proper analytical methodology, meaningful insights can be retrieved, not only for damage assessment and monitoring of such devastating events but also as support in the humanitarian efforts performed worldwide.

Download the Brief Report of the Flood Impact over Balochistan and Sindh provinces around Indus River, and discover how you can take advantage of high-resolution satellite imagery, like Copernicus Sentinel-2, to gain valuable insights for the Natural Hazard Assessment and Human Crisis: 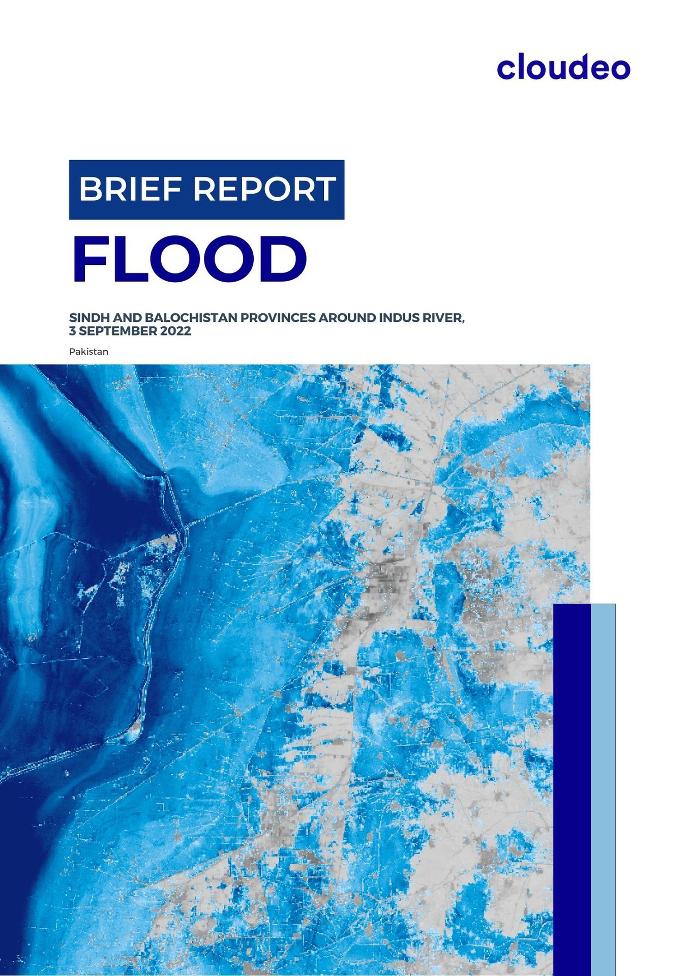 *Please note that the analysis presented in this report contains information from ESA WorldCover and the GlobalMLBuildingFootprints database, under the Open Database License (ODbL). The administrative boundaries of the affected area used for the analysis were made available through the Humanitarian Data Exchange managed by the United Nations Office for the Coordination of Humanitarian Affairs (OCHA). Also note that all impact numbers refer to the state as of the 3rd of September 2022 and are subject to change. If you require a more recent analysis for the specific event, please contact our sales team.
# Disaster Management ESA Flood Sentinel Hub Use-case